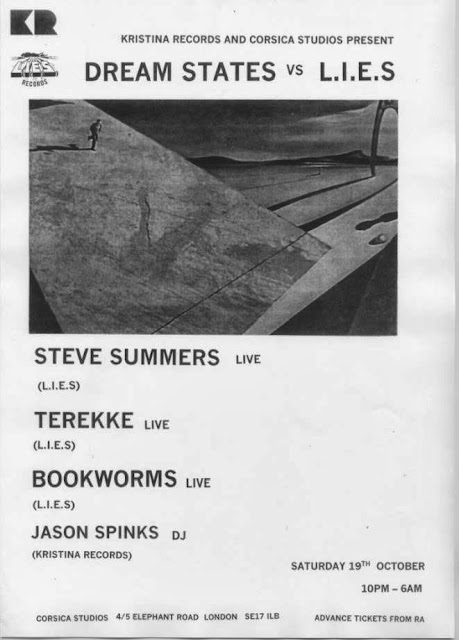 On Saturday Elephant & Castle's Corsica Studios played host to a trio of LIES live sets. Although the Lies crew have had a recent european tour, the label's artists are relatively rare bookings. And as the forthcoming title of their label compilation suggests - “Music For Shut Ins”- many of the acts on their roster are perhaps more suited to bedroom listening than dancefloor abandon.

The first to mount the hardware filled stage was Bookworms, a young producer whose tracks have taken on an increasingly gear heavy approach of late. His set started at full throttle and didn't let up one iota. In place of the hypnotic chugging rhythms which characterise his released output, were sheets of static noise. Such industrial flecked sounds often overpowered the throbbing techno kicks beneath. It was more intense and unforgiving than I or those around me were expecting, though what the set lacked in structure, it more than made up for with atmospheric murk. A bracing hour which was perhaps long enough given its challenging nature. It will be intriguing to see how Bookworms' live set develops as he is obviously an artist with many sides to his sound, as capable behind a drum machine as an mpc. Yet it would have been nice to see him incorporate more sample based material, a la "African Rhythms". This would have breathed some colour into an occasionally monochrome performance.

After a brief interlude, it was time for headliner, Steve Summers. A more experienced live proposition, he oozed assuredness throughout; always ensuring the frequencies were spot on, and really working one of the best systems in London. He treated the revellers to a flurry of released material (he has a lot to choose from) including the mighty “Call Of The Wild” whose oscillating synth lines sounded triumphant, and somehow less outré in a club than on record. Summers' experimental tendencies surfaced as he began sequencing his own voice into the mpc, whence it emerged with varying levels of distortion, sounding anything but human. It was an engaging spectacle of a hardware lover at the top of his game.

The final in the trio of live performances was perhaps the most hotly anticipated; Terekke. The slight, baseball capped figure added a welcome touch of deepness to proceedings. His set had an elegance that the night had hitherto lacked, and the crowd were content to bask in the warm ambiance of Gardner's blissful jams. “Amaze” made an appearance, along with a host of other equally beautiful tunes such as "Fantasee". This guy's releases so far have been some of the best received on lies to date, and he possesses a sublime sense of melody- with a knack for squeezing as much life as possible from the smallest snatch of a sample. It was obvious from this set that there is a lot more goodness awaiting release. Let's just hope he presses record a bit more so we can all savour these heavenly sessions. For now i'll have to content myself with some hazy but powerful recollections of really fucking enjoying it.